You can allow people to vote multiple times per idea or LIMIT ONE VOTE PER IDEA per participant.

You can set votes as UNLIMITED FOR FACILITATOR if you simply want it to record a number via a physical count (e.g. raised hands).

Votes are generally done independently, but you could manage the visibility and timing of when votes are shown to engage the team in different ways.

A member can also choose to ABSTAIN from voting if they wish to not take part. In doing so, it will be considered as if they had finished voting but also be highlighted in the side bar as a label next to the member

This will be reflected in the meeting summary in the SHARE stage which will show how many people voted. They will not be considered as part of the voting process and hence not reported on

Additionally, participants can now click "I'm Finished" if they do not wish to cast all of their votes. Facilitators can enable "Must cast all votes" under the voting options to change this 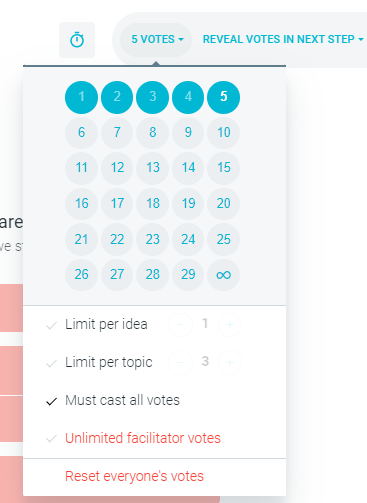